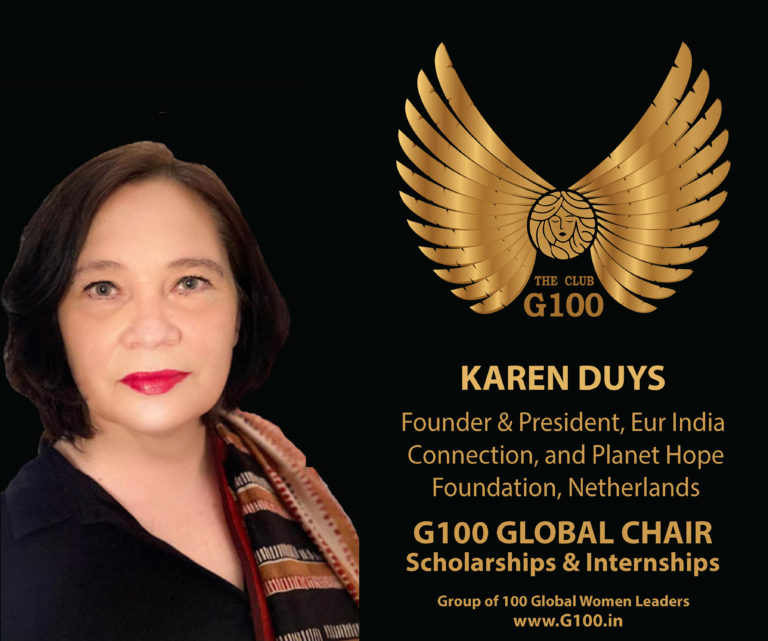 She is a highly experienced senior advisor to governments and social organizations who has worked for governments at local, regional and international levels for over 30 years. She has been committed to concrete cooperation between governments (municipalities, ministries), institutions and small and medium-sized companies between the Netherlands, Europe and the rest of the world, she has greatly contributed to building Netherlands – India exchange.

During her work with the municipality of The Hague for more than 15 years, Karen put the cooperation with India on the Dutch agenda, resulting in many delegations led by the Mayor of Hague to Bangalore resulting in many MOUs with the State government of Karnataka in the areas of care, economy, water and infrastructure. Since 10 years Karen also serves as senior advisor to the Mayor of Rotterdam and aldermen of various municipalities. She also led the implementation of the noted Healthcare and Participation Act at the department of Health and Welfare of the City of the Hague, Netherlands, as well as at the Care, Welfare and Culture department of the province of North-Holland, Strategic Economic Projects Unit of the province of South Holland.

Karen was elected as member of the city council of the municipality of Rotterdam for more than 10 years. She was the leader of a political party and member of special committees Labour & Education, Economics & Urban development, Care & Welfare. She was member of the confidential committee for the selection of the Mayor of Rotterdam municipality of Rotterdam. She described her experiences of being a politician in the Dutch administrative & political system in a book entitled Dual of Duel. This book has been distributed among all Dutch representatives in the Netherlands and is used at the university for the students Public Administration.

With a degree in Public Administration, having studied in Rotterdam and Leiden, Karen believes that the Netherlands and Europe can learn a lot from the innovation and strength that manifests itself in India. Conversely, the Netherlands and other European countries has lots to offer India as well. Karen is also Founder and President of Eur India Connection, a Dutch – Indo organisation that works and builds an international network of organisations committed to sustainable projects.

She is also the founder of the non-profit Planet Hope foundation which initiates educational and empowerment programs and provides vocational education, training, support and scholarship programmes in different communities in India, Peru & Ethiopia, enabling many young women to dream, learn, travel and explore, building their self-confidence and exposure in priceless ways.

In the last 10 years, thousands of youngsters & families were supported and guided to develop and use their talents to get jobs and start their own enterprises. These have branch offices in Bangalore with outreach to Pondicherry and Darjeeling. She also serves on several advisory boards of civil society organizations in the Netherlands.

Like the Arosa foundation, the largest women’s shelter organization in Rotterdam; the Resto van Harte foundation which is dedicated to combating social isolation and stimulating contact between local residents by setting up social restaurants; Mano foundation which stimulates youngsters to participate in society and creates the conditions for people to discover and use their talents and unique qualities; and Laurens Fund that supports projects and social initiatives that are aimed at receiving, strengthening and social connection of marginalised and vulnerable people, especially young people and the elderly.