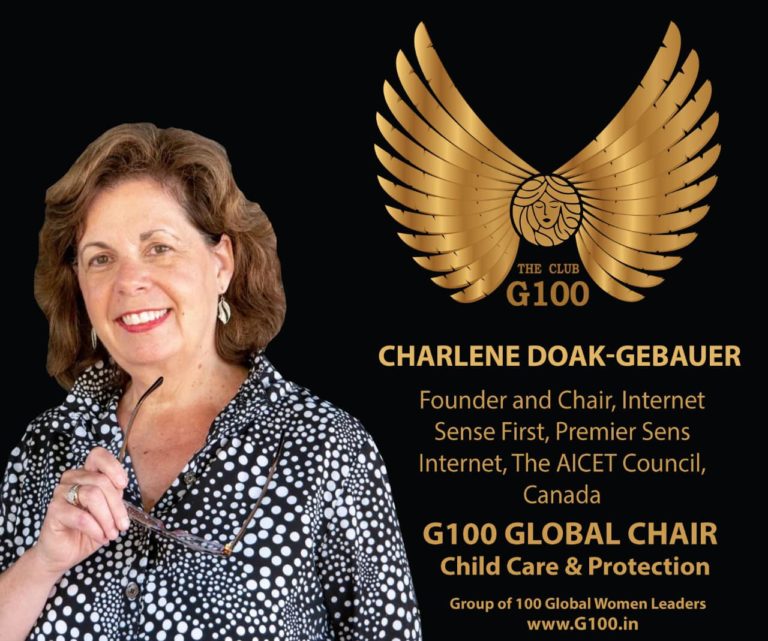 She is the Founder and Chair of the federal Canadian charity “Internet Sense First”, as also the AICET Council (Anti Internet Child Exploitation Team), she is an eminent expert in child protection. Author of two books – “Digital Sexual Victims: True Cases” she was nominated for an international award by the Delta Kappa Gamma society of educators; and her newest release is, “The Internet: Are Children In Charge?”. Both books are available on 40,000 distribution channels worldwide. The objective of her organisations is to educate the public regarding the Theory of Digital Supervision for proactive online child protection. Internet Sense First provides funding for therapy for victims of Internet child exploitation.

Educated at four universities (University of New Brunswick, University of Western Ontario, University of Toronto and University of California Santa Barbara), Charlene knows from experience that her holistic approach can be effective. Many people ask why Charlene became involved in such a quest. Her family was affected by the crime of children pornography twice – two different members, two different times, two different cities, and as Charlene says, too many times. Her family member was four when neighbours used her for inappropriate activities, pictures, and videos. Her family member lived her life to the beat of her own drum, only to be killed by a drunk driver at the age of 22. Charlene began her charity in memory of her family member and in support of all victims globally. A dear Soul Sister dedicated to safer societies for children and an ardent advocate for setting standards for childcare policies worldwide. The empowered and eminent group of #G100 is stronger with your presence and leadership.