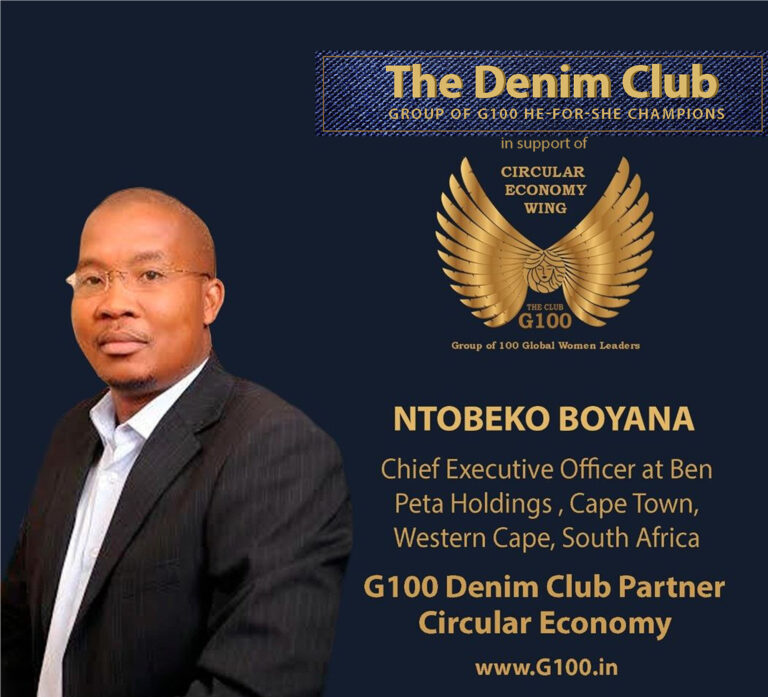 Ntobeko Boyana, Chief Executive Officer at Ben Peta Holdings, Cape Town, Western Cape, South Africa. Ntobeko, a chemist by training with a BSc degree (majoring in Chemistry, Mathematics and Applied Mathematics) from the University of Port Elizabeth and a short course in Business Focused Project Management from Khumalo Green. He is a Chief Executive Officer at Ben Peta Holdings, a company he founded in 2017. He was Head: Market Development & Research at BOTEC Tyre Recycling (2017 – 2019), where Ben Peta Holdings was a shareholder. His responsibilities are to strategically grow the business, product development, develop new markets and expand existing markets for waste reuse and waste derived products use locally and internationally. He started his 21-year professional career as a Trainee Chemist at Continental Tyre South Africa in 2001, where he learnt product development, quality control and product testing, process optimization and troubleshooting. In 2002, he Joined Sappi Fine Paper as a Technical Assistant responsible for process engineering and optimization.

He also chaired the Hazardous Chemicals Committee. After 3 years he was promoted to the position of Wet End Chemist with Sappi Technology Centre supporting all Sappi Mills in South Africa, by planning and running process trials, working with technical managers, process engineers and chemical suppliers. He was a delegate at the PIRA International Wet End Chemistry Conference in Madrid, Spain in 2006. Between 2007 and 2009 he was Research Chemist at Interwaste responsible for analysis of waste and development of waste treatment regimes, interpretation of lab results and interrogation of waste for potential value, giving technical advice to the sales and operations teams and providing technical solutions to customers. He founded Embo Envirosol in 2009, where he was Managing Director, overseeing the strategic and day to day management of the business. Amongst other tasks, he was also involved with sales and marketing, managing waste beneficiation projects, and developing young chemical engineers. At lab scale, the company had several successful projects including the development of fertilizer from sunflower husk ash, the extraction of oil from margarine waste to produce biodiesel, the extraction of petroleum jelly from hair relaxer cream waste, and the development of animal feed from vegetable waste. Additionally, Embo Envirosol was able to facilitate the in-service training of eight young chemical engineers. Unfortunately, the company had to close its doors for good in 2016 due to some wrong decisions made and tough market conditions. Ntobeko may have lost the money, but certainly not the lessons.

From July 2016 to October 2017, he consulted for Kusaga Taka Consulting (Pty) Ltd as a Demand Project Manager. A role that played to his strengths in leadership and research. His responsibilities included repurposing the waste tyres collected nationally, developing, and driving supply and demand strategies to meet business targets, negotiating agreements, building, and maintaining relationships with external stakeholders and prospective business partners, and analysing the market and advising the business on demand forecasts and projections. To better understand the international market for waste tyres, he visited Lisbon and Setubal, Portugal in 2017, with specific focus on Tyre Derived Fuel (TDF) and Crumbing. Passionate about leadership, he cofounded and served as chairman and treasurer for the Science Development Programme for Underprivileged Pupils (SDPUP).

He has served as Chairman of the Programme for Technological Careers (PROTEC) Port Elizabeth Branch board, board member for Bay FM, member of the SRC at University of Port Elizabeth, member of Institute of Materials (IOM), member of Technical Association of Pulp and Paper in South Africa (TAPPSA), and Deputy Chairperson of the School Governing Body at Laerskool Panorama. He also received a Certificate for Leadership for the next millennium from USAID and received Sappi Silver African Award for excellence. Currently, he is a member of Council of the Cape Chamber of Commerce and Industry and Chairperson of the Khayelitsha/Mitchells Plein Chapter, African Circular Economy Network (ACEN) Chapter Lead for South Africa and a member of the Executive Committee.