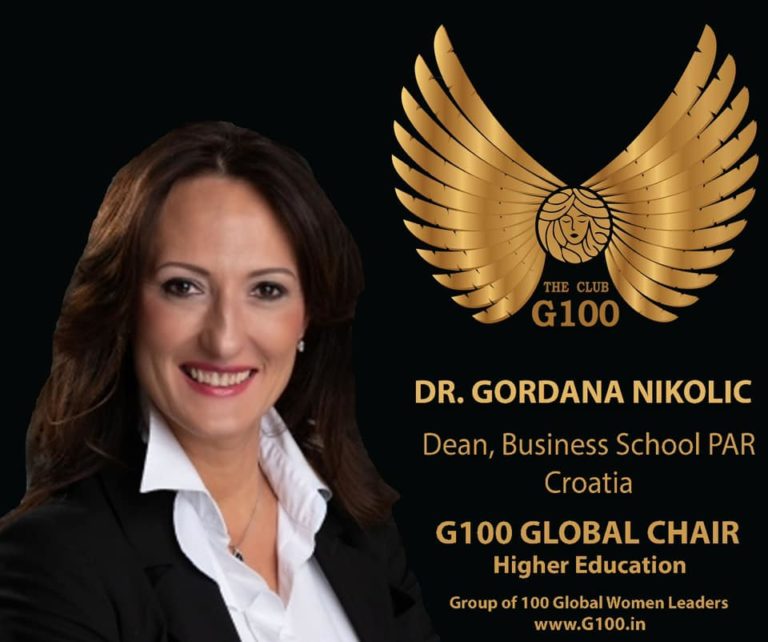 She is the Businesswoman, featured among top 100 Croatian Leaders, she is founder, owner & Dean of PAR University College, Croatia, the only independent higher education institution in the northern Adriatic region, and among Croatia’s top 20 educational centres for entrepreneurship.

She is also owner/director of Business Academy Rijeka. She has received many prestigious awards including: Best Woman Entrepreneur in Croatia in 2015 by the Croatian Association of Business Women – KRUG; In 2016, she received an award from the Primorje-Gorski Kotar County for the promotion of science, education and female entrepreneurship in the region.

The same year, she was also given the annual award from the City of Rijeka for her outstanding contribution to the fields of higher education and entrepreneurship, and for launching the first private higher education institution. She is Vice President of the Global Women Leaders Committee, which brings together women in the global network of business angels.

All of these awards, she says, “made PAR a strong promoter of women entrepreneurship and higher education quality on a national level”. In addition to her business leadership and entrepreneurial roles, she successfully also leads her scientific career as a part of the international scientific committee of the Masters Program “Technologies for the Development of European Projects” in cooperation with EPA (European Projects Association) and the European Academy.

She has participated in the development of several projects related to the development of economic entities, including Implementation of the Croatian Qualifications Framework and the development of competences for lifelong learning, Ministry of Science, Education and Sport of the Republic of Croatia; Further Development of the Croatian Qualification Framework (CROQF) TOT IPA Component IV-Human Resources Development-European Union Programme for Croatia, Ministry of Science, Education and Sport, WYG International Ltd.; EntrepreneurSHEp Croatia-Enterprise Europe Network, project co-financed by the European Commission.

Dr. Gordana has been promoting lifelong learning projects and cooperates with international scientific institutions in the city of Rijeka since 2007. While doing so, she is especially committed to her social responsibility in the organization of educational programs for students and the unemployed people. She has successfully cooperated with the City of Rijeka on a number of projects such as Healthy City, Youth Council of the City of Rijeka, education of athletes, hosts of the international summer school SenZations, organization of the international carnival school INCASO and a number of humanitarian actions, etc.

She is the President of the program-organizing committee of the PAR International Leadership Conference (PILC), which she organized in cooperation with the prestigious Iacocca Institute five years ago, and recently became a member of the Editorial Board of the International Journal for Quality Research. With the goal of contributing to education in the local community, PAR has founded several NGOs; PAR Alumni, PAR Sport and PAR Institute for the development and promotion of lifelong learning. Its work is aimed at incorporating the efforts of existing PAR entities into developing the civil society. An ardent educator and experienced mentor, she believes, “When you have a goal and you start working on it – the goal comes to you.” A dear Soul Sister who supports the start-up culture, entrepreneurship and lifelong learning for all.