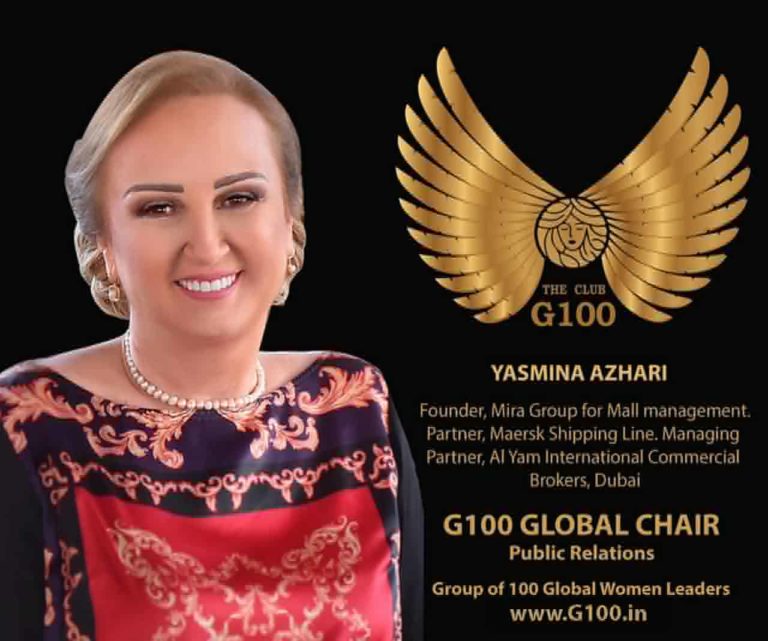 She is a Forbes listed businesswoman and a pioneer. Yasmina was selected 4 times by Forbes as one of the 50 most powerful Arab Business Women and was chosen among the most 100 powerful women in the Arab World by the Arabian Business 3 times.

Based in the UAE, she hails from Syria where she was founder of Mira Trading, a company managing malls and supermarkets, as also Vice President of a premier shipping agency representing Maersk Shipping Line and leading it to a prosperous business, notably in a field traditionally dominated by men.

Due to the civil war in Syria, she left the country in 2012 and came to UAE where she established Al Yam International Commercial Brokers 2014 and has a strong network of 40000 parties around the world following up opportunities through her company in Dubai.

She served as Chairman for Syrian, Saudi Company for Touristic Investments Ltd, the owner of Four Seasons Hotel in Syria. She represents the Dutch organization PUM, which promotes self-sustainability and private sector development.

Decorated by Her Majesty The Queen of The Netherlands as a “KNIGHT”, Yasmina serves as Honorary Consul of the Netherlands at Lattakia & Tartus. She was the first woman to be on the board of the Lattakia Chamber of Commerce and was elected three times as the Head of Lattakia Businesswomen’s Committee.

She also served as Vice President at the Arab Business Women Council for 12 years. In 2011 she was chosen among the most 100 most powerful women in the Arab world by the “Arabian Business” by CEO Middle East and was awarded by E&Y as the best entrepreneur of the year. She was honored at the Hall of Fame in Shanghai by E&Y. She has been nominated by the Chamber of Commerce and Industry of Abkhazia and Armenia to represent them in the GCC Gulf region since 2014 until today.

In April 2019, she was nominated by the Australian Chamber of Commerce and Industry as a representative to promote opportunities for better trade and exchange between Australia and the countries of the Arab league, and all the countries in which Al Yam international company operates. Above all, a dear Soul Sister who exemplifies the power of hard work + heart work with a spirit that never quits and is ever resilient.