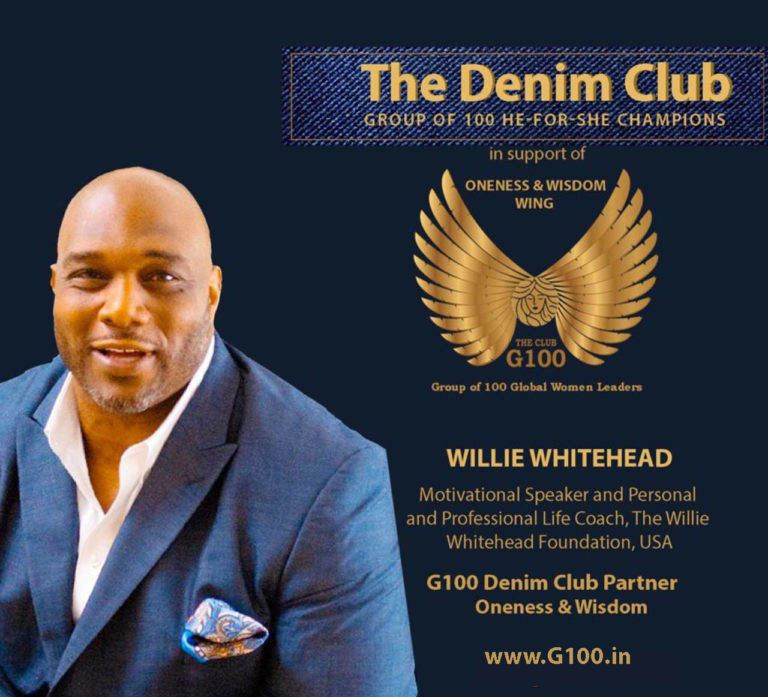 On behalf of Anita C Powell, G100 Global Chair- Oneness & Wisdom, welcoming for this wing G100 Denim Club partner & inspiring leader, Willie Whitehead, Motivational Speaker and Personal and Professional Life Coach, The Willie Whitehead Foundation, USA. NFL veteran Willie Whitehead Jr. has earned national recognition as a leading Defensive End, Celebrity Speaker, Author, Entrepreneur and Philanthropist but now he is also known the world over as an Energy Coach and Healer, helping others to shift their energy, realign with their inner power and boldly transform their dreams into tangible reality.

The Tuskegee, Alabama native began his professional football career in 1995 after graduating from Auburn State University with a Bachelor’s in Communications. Most revered for playing eight consecutive years with the New Orleans Saints, Willie spent a total of 11 years as a Defensive End in both the Canadian Football League (CFL) and the NFL. During this time he learned and implemented several alternative healing modalities, energy alignment techniques and mental focus exercises to assure his peak performance both on and off the field.

After retiring, Willie experienced the ebbs and flows that accompanied his transition from what seemed like one life to another including depression and feelings of shame, detachment, and despondency. Deciding to trade his pain for passion, he recommitted himself to the Willie Whitehead Foundation (an organization built to empower and inspire the youth to live a purpose filled life while staying in alignment with their dreams in spite of adversity) and XPro Training (a program pairing professional football veterans with up and coming, young athletes to build both mental and physical fitness as they move towards future educational and career opportunities).

Expanding his focus, he recognized the mental, energetic and spiritual needs of professional athletes as they navigate the challenges of the journey from rookie to vet and made the conscious decision to combine his own experiences with professional training so that he may help others avoid the pitfalls that he once struggled to overcome.

Over the next ten years Willie Whitehead, Jr. devoted his time to learning from and working with several leading coaches and teachers, entitling him to become a Certfiied Energy Healer, Certified Hypno Therapist, and Master NLP (Neuro-Linguistic Programming) Practitioner. Now, instead of stopping and blocking powerhouses on the field, he helps them tap into their inner source and remove the blocks stopping them from manifesting their greatest potential. Combining the powers of Energy Healing, Spiritual Coaching, Mental Reprogramming and Body Mechanics, Willie Whitehead, Jr. has dedicated his life to helping others turn on their unlimited power by tuning out the noise and tuning within to take authority over their own dreams and desires.