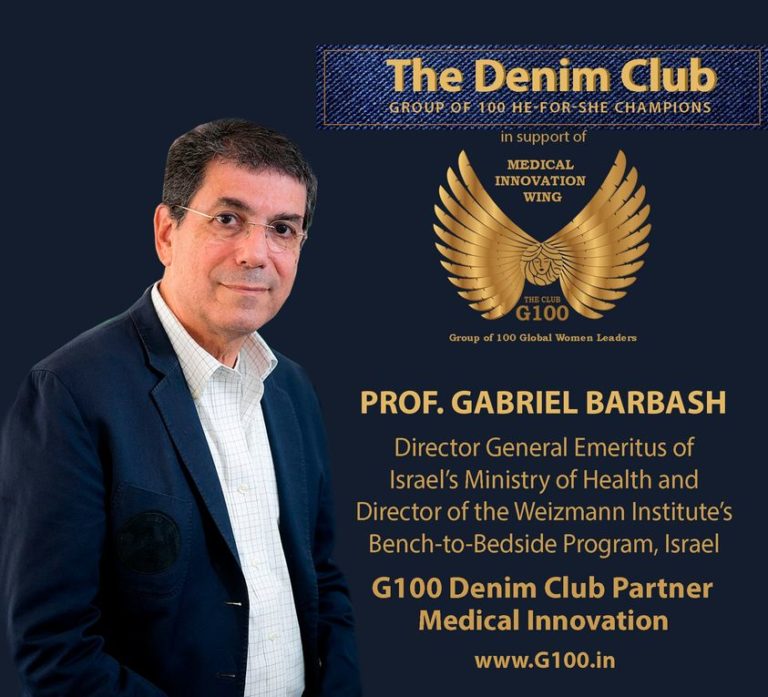 Prof. Gabriel Barbash, Director General Emeritus of  Israel’s Ministry of Health and Director of the Weizmann Institute’s Bench-to-Bedside Program, Israel.  Prof Barbash was recently nominated to head the Israeli Genome Project, the National Precision Medicine Initiative (“Psifas”) with the mission to promote the scientific and medical aspects of personalized medicine, as well as to promote an ecosystem of innovation within the local technology/industry communities. Dr. Gabriel Barbash served as the CEO of the Tel Aviv Sourasky Medical Center (TASMC) from 1993 to 2015. He led building expansion including significant fund-raising; supervised architectural design and construction of more than 1,000,000 square feet of mainly in-patient facilities; extended the scope of medical research and recruited top medical professionals. During his tenure, far more medical interns choose the TASMC as first choice for internship than any other teaching hospital in the country.  In 1996, Dr. Barbash was appointed Director General of the Ministry of Health, a position he held until 1999.

During this time he introduced a number of programs that had critical, lasting impact upon Israel’s healthcare system; a program to control tuberculosis after a dramatic surge of new cases occurred with the arrival of a large number of immigrants and the introduction of nationwide mammography screening for women over 50 years of age, which is still in effect. Dr. Barbash served as the chairman of the Israeli National Transplant Center (1998-2000), where he reorganized the system of organ harvesting in Israel and doubled the number of organ transplantations. Since 1995, Dr. Barbash has served as Chairman of the National Project for Developing and Implementing a SAP-based Management and Clinical Information System for the ten government medical centers which includes over 17,000 users. This system is in operation these days. Dr. Barbash serves on the Board of Directors of Clal Biotechnology Ltd, Israel’s leading Life Science Venture Capital. In 2005, Dr. Barbash was appointed Chairman of 3DV Systems and, together with a newly appointed CEO, turned the company around, raising over $20 million from tier one investors including Kleiner Perkins and Pitango.

As a result of the company’s breakthrough technology, 3DV emerged as a leader in next generation man-machine interface domain, primarily in video gaming and PC.  3DV was sold to Microsoft (NASDAQ: MSFT) prior to its initial product launch. From 1989 through 2000, Dr. Barbash was Israel’s national coordinator and principal investigator for numerous multi-center cardiology studies. Dr. Barbash has published more than 80 original papers, mainly in the fields of diagnosis, risk assessment, and treatment of acute myocardial infarction. Many of his papers were published in the prestigious peer reviewed medical journals Circulation, Journal of the American College of Cardiology and the New England Journal of Medicine. Dr. Barbash is a Professor of Epidemiology and Preventive Medicine in the Tel Aviv University. From 2008 to 2012, he was a Visiting Professor at Columbia University.

In September 2015, Dr. Barbash was appointed as the Director of the Bench to Bedside (BtB) program at the Weizmann Institute of Science in Rehovot, Israel. In January 2017, Dr. Barbash founded Consilium Ltd, a new concept-service providing top doctors, quality medical case-management, for complex medical situations. In 2017, Dr. Barbash served as a WHO consultant and mentored the new Head of National Children Specialized Hospital “Okhmadyt” of the Ministry of Health of Ukraine, Kyiv, Ukraine. During his military service, Dr. Barbash served as a flight surgeon in the Israeli Air Force, and as Deputy Surgeon General and Physician of the Combined Air-Ground Operations Command.

Dr. Barbash is a graduate of the Hadassah Medical School of the Hebrew University, Jerusalem, and is board certified in Internal Medicine, Medical Management and Occupational Medicine.  He also holds a master’s degree in public health (MPH), specializing in Health Policy and Management, from the School of Public Health at Harvard University.