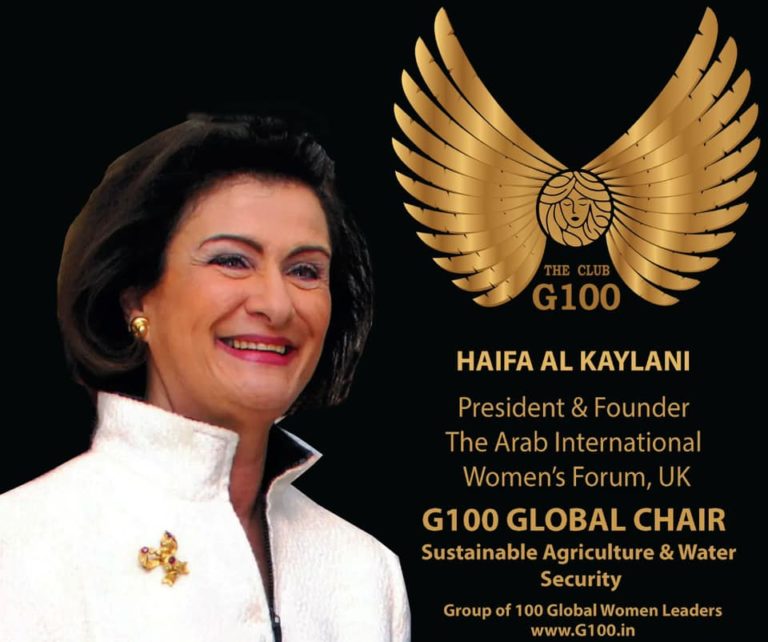 She is the President and Founder of Arab International Women’s Forum (AIWF), she is a Fellow of the Harvard Advanced Leadership Initiative (2017) and served as a Commissioner on the ILO Global Commission on the Future of Work (2017-2019). The Arab International Women’s Forum (AIWF) is recognised in Arab and international government, private sector and NGO circles as a high-impact change agent focussed on women’s leadership and youth empowerment, working for progress, inclusion, peace and prosperity in the Arab region and internationally.

Haifa founded the Arab International Women’s Forum in London in 2001 as a development organisation committed to supporting women’s leadership in social and economic growth in the MENA region and internationally and creating equality of opportunity for all. Haifa served as the Chair of AIWF for 20 years and under her leadership, AIWF has become one of the world’s most respected development organisations for the economic empowerment of women and young people, working at the highest levels with a global network of corporate, institutional and global advocacy partners to advance momentum for women’s leadership in all sectors and spheres.

Haifa is a development economist, an alumna of the American University of Beirut and read for a Diploma in Economic Development at Oxford University, a Fellow of the Harvard Advanced Leadership Initiative 2017, and a Commissioner of the ILO Global Commission on the Future of Work (2017-2019). She brings a wide range of skills and experience to her personal mission of encouraging greater cultural understanding and sustainable economic growth and reform, supporting a strong role for women and young leaders at the heart of that process.

Haifa was appointed as the only Commissioner from the Arab world to the ILO Global Commission on the Future of Work in August 2017, and also served in 2012 on The Commission on Global Security, Justice & Governance chaired by former US Secretary of State Madeleine Albright. She was the first Honorary Member of the Euro Mediterranean Association for Cooperation and Development (2012). She became a Fellow of the Harvard Advanced Leadership Initiative in 2017, spending a year in Cambridge MA to undertake the year-long intensive Fellowship to research and address global sustainability challenges. Haifa Al Kaylani has received international recognition and numerous regional and global awards.

Most recent awards include her inclusion by Women in Business Arabia as one of their 365 Inspiring Arab Women 2020, and in Cranfield University’s Women to Watch 2019 supplement launched alongside the Female FTSE Board Report. In 2018, Haifa was the honoured recipient of the Outstanding Golden Shield Award presented by the Arab Women Council in Cairo for her exceptional efforts to enable and advance women and youth through education and economic opportunities in the MENA region and beyond. Also in 2018, she was honoured by the American University of Beirut when she was named amongst the leading women alumni recognised and featured in the book For All Conditions of Men: Stories of Women at AUB, and she has been featured in Forbes Middle East’s LeaderBoard: Standing Out list of High Achievers (July 2017), recognised for her leadership of AIWF and her commitment to encouraging cultural exchange and understanding between communities and promoting gender equality around the world .Previously Haifa received in the UAE The Pearl Initiative Recognition for a career Focussed on Arab Women Leadership.

The many awards and honours that Haifa has received during her voluntary service career speak to the high regard in which she is held. These rewards also recognise the significance of the contributions that she has made over the years and continues to make to advance women and young people in the UK and in the Arab World. She remains an eloquent and compelling champion for many good causes, ensuring that women’s voices are heard, their contributions are recognised, and their priorities are addressed. Through her dedicated work and tireless energy, she has leveraged her network and paved the way for so many to have access to wider opportunities. A dear Soul Sister whose vision and commitment have made it possible for more women to broaden their horizons and have the opportunities that she has worked so diligently to make available for all.