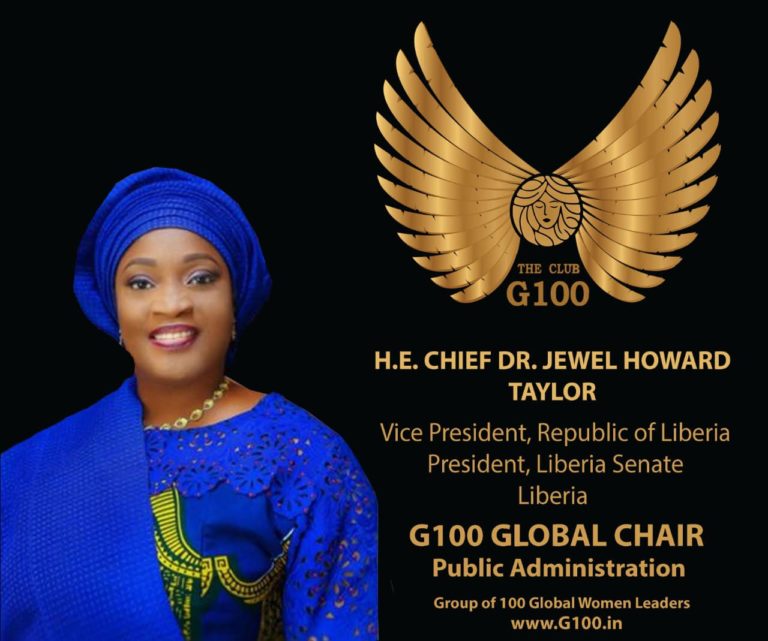 As a result of her National impact, Vice President Chief Dr. Taylor has been a recipient of many accolades, Laurels and Awards from Local, National and International Organizations, ranging from humanitarian awards to outstanding Leadership awards. Key amongst many of them are: Women Activist Award, (2016) for her role in gender advocacy and empowerment; The Nation’s highest honor as Knight Great Dame, Order of the Most Venerable Order of the Pioneers in 2005; granted to her by Former President Charles G. Taylor for her service to the Nation as the 21st First Lady of Liberia; The First Female to be given the Distinguished Traditional Title of Venerable Chief in the National Traditional Council of Liberia in 2011, a Chieftaincy title conferred on her by Traditional Chiefs and Elders of Bong County for her role in sponsoring the a bill which created the National Traditional Council of Liberia; and in full recognition of her exemplary Services to the people of Bong, yea Liberia; The Ellen Johnson-Sirleaf Presidential Recognition Award for Humanitarian Services and contribution to Youth Development in Liberia from the (AAW Peace) African & American Women in 2011; Senator of the Year, 2008, 2009, 2010, 2011, 2012, 2013, 2014, 2015 from various organizations;

The National Excellence Award for National Service in 2011; The National Excellence Award for Philanthropy in 2009: The Pan African Award on Leadership Excellence & Women Empowerment, an Humanitarian Award 2016; Woman of the Year, 2016, West African Philanthropist Organization; Women Activist Award, 2016; West Africa Philanthropy Awards as Woman of the Year, 2016; 2nd Chance International Award as a Woman of Distinction 2015, New York City USA; (ECOWAS) ECOFEPA Good Will Ambassador, Abuja, Nigeria; 2015; Women Advancement Forum Award in recognition of her contribution to the Emancipation, Motivation and Advancement of Women of the World; 2014, Gambia; The Outstanding African Women Achievers Award, as African Mentor and Role Model 2013, from the African Women Leadership Organization(AWLO), in Nigeria; An African Leadership Award, as Outstanding African Female Leader of the Year 2012 from the African Leadership Award, in Dubai; An Excellence Award in Recognition of her Advocacy for the Rights and Empowerment of women from the African Women in Leadership Organization (AWLO) in 2012, in Nigeria

She was often referred to as the “People’s Senator” and in confirmation of this title, Newsweek Magazine voted her the 2nd Most Powerful Female Politician in Liberia in 2011. Vice President Chief Dr. Jewel Howard-Taylor, a Nationalist, Former First Lady of the Republic of Liberia, an Eminent Citizen, a Devoted Christian, the Standard Bearer of the National Patriotic Party, a Vice President of the Republic of Liberia and President of the Liberian Senate, a Distinguished and Dedicated Public Servant, a Patriotic Citizen and a Positive Role Model. A dear Soul Sister with passion and commitment for more equitable nations for all. The empowered and eminent group of #G100 is stronger with your presence and leadership.