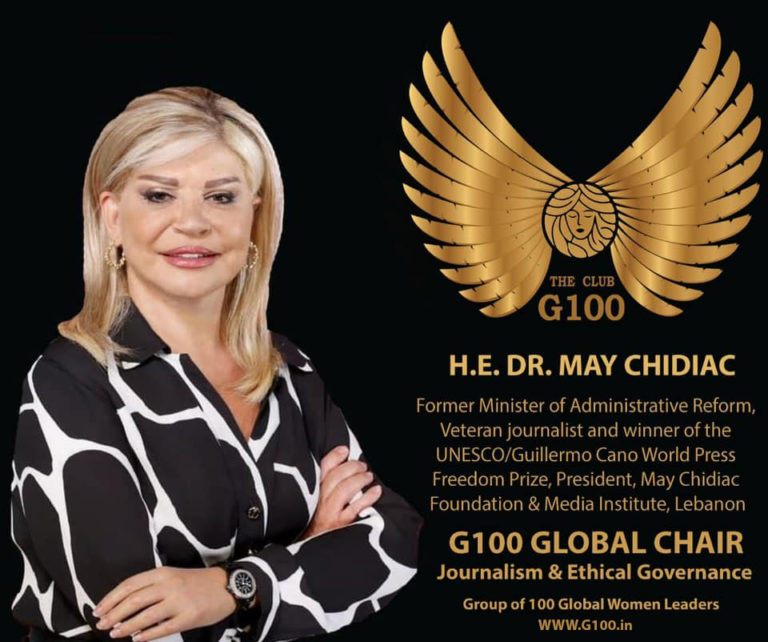 She is the President and founder of May Chidiac Foundation- Media Institute (MCF-MI), Head of GROUND-0 Beirut Relief Committee, May Chidiac is a veteran Journalist, an editor, a Radio Host and a news anchor since 1985 with a career spanning for more than 25 years. She fought for the freedom of the Lebanese people when few dared to speak up against the prevailing state of tyranny, through morning political shows. Six months after the assassination of former Prime Minister Rafik Hariri in 2005, Chidiac was attacked by a car bomb causing her to lose her left leg and arm. She returned to the TV screen in a prime time political talk show called “With Audacity” from 2006 till 2009.

She was also the Head of the Press Division at the Lebanese Embassy in Bern-Switzerland between 1989 and 1990. May Chidiac is the recipient of several Decorations and Medals including the “Chevalier de L’ordre de la Légion D’Honneur”, decorated by the Former President of the French Republic, Jacque Chirac in May 2007 at Elysee Palace, as well as the Medal of “Dame de L’ordre de Saint Gregoire- Le- Grand” awarded by Pope Francis in 2017, that she received by the Maronite Patriarch Cardinal Bechara Rai in May 2018 at Bkerke.
Throughout her career, Chidiac received numerous international awards and prizes, of which: “Le Prix de la Francophonie pour la Liberté d’Expression”, and the “UNESCO Guillermo Cano World Press Freedom Award”.

In October 2006, she was awarded the IWMF (International Women Media Foundation) “Courage in Journalism Award” delivered in Los Angeles, New York and Washington.In 2017 she was the recipient of “Minerva Anna Maria Mammoliti of Human Rights and Civil Rights Award presented in Rome.Dr Chidiac is the member and member of Jury of several organizations as well as vice president such as Member of the “High Panel for Peace and Dialogue of Cultures” UNESCO in 2010, was Honored as part of “She Made it” by the Museum of Television and Radio in 2007 in New York and the Vice president and Jury member of UNESCO for the award of Emir Jaber Al Ahmad Al Sabah for Empowering People with Disabilities through Digital Technologies since 2016.

She is the Member of Jury at the L’Association des Femmes Leaders Mondial de Monaco in 2017 and was the Moderator in the International Conference on Youth and Information and Communication Technologies Preventing Violent Extremism at Cyberspace UNESCO in Beirut the same year. May Chidiac was a participator in several forums and colloquiums throughout the years, she was the honorary speaker as one of the Guillermo Cano Awardees in Paris in 2006, a keynote speaker and Guest at the Women’s Forum at Deauville- France from 2007 till 2014, a key participant in the UNESCO Global Forum on Media and Gender in Thailand “Documenting Change/Empowering Media- Gender Mainstream in the Media Middle East Report in 2013 as well as an Honorary Guest and Lecturer at the University of Sydney on “The role of Women in The Media” in 2014. She was the participant in the Fourth World Conference on Women:

The Beijing Declaration and Platform for Action: “Enhancing Women’s Share in Peace and Security at the 1325 UN Resolution-Vienna with the Request of the Austrian Parliament in 2015. In regards of the Foundation programs and the academia, Dr Chidiac as president of MCFMI has contributed through her foundation that is dedicated to training , research and educate on issues of Media, and democracy executed several projects on subjects such as GBV in collaboration with UNESCO and currently executing a similar project with UNWomen.

Some of the projects that MCF conducts highlighting women are Women on The Front Lines projects with panels such as “Women Fighters and Survivors of the Iraqi Conflict”, “Mother of Extremists: Stories and Recommendations” and Women of Honor” Heroines of Peace in Times of Conflict.” Politically, Dr. May Chidiac was designated Minister of State for the Administrative Reform in the government of His Excellency the President of the Council of Ministers, Mr. Saad Hariri. A dear Soul Sister, she is a phenomenal force of nature. The empowered and eminent group of #G100 is stronger and resilient with your presence and leadership.