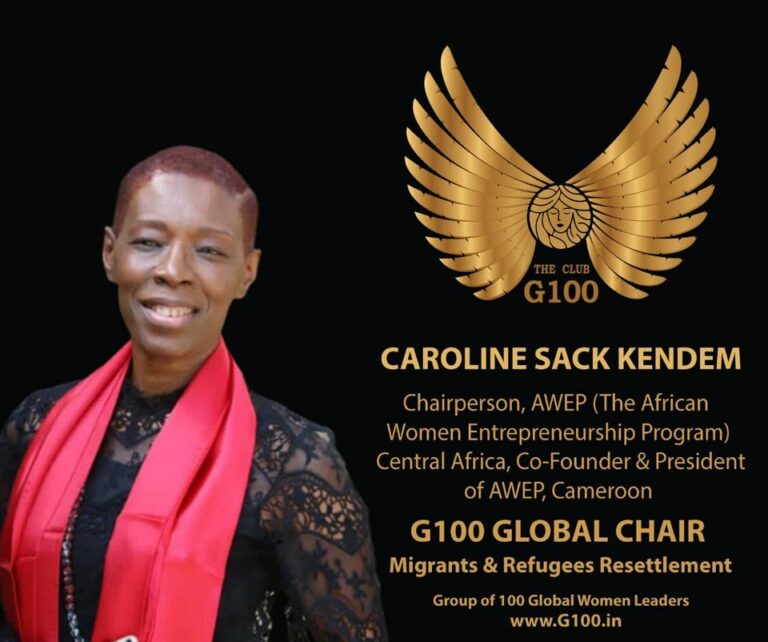 Caroline Sack Kendem is the co-founder and President of AWEP Cameroon (The African Women Entrepreneurship Program for Cameroon ). She is also the chairperson for AWEP Central Africa and a representative of all the French speaking AWEP branches (total of 19 branches). Caroline is a woman committed to the fight against the economic and social exclusion of African women for almost 13 years now. Her activism and commitment radiate in Africa.

In 2012, when she launched AWEP Cameroon, she was a pioneer in the fight for better access for women in the business world. AWEP activities are aimed at female entrepreneurship, coaching, leadership, mentoring as well as the empowerment of young girls and women. In 2017, AWEP Cameroon received a 85 000 USD grant from the US Department of State for the implementation of an empowerment project for women and young girls in the northern regions of Cameroon which faced at that time terrorism. Caroline was the lead coordinator of that 2-year project which involved the training and capacity building of 500 grassroots young girls and women. She also coordinated the building of sheepfolds and collaborated with local veterinarians to train those group of women on first aids to be given to animals. Thereafter, it was about providing the marketing skills and at last connecting them to local markets. The second part of the project was to create and raise awareness among those women’s groups, by inviting moderate imams, traditional leaders/elders, women leaders and survivors of domestic violence and former/disengaged terrorists. Caroline took the risk of going to these regions when nobody wanted to go there to reach out to these women and raise awareness on the absolute necessity of counter-terrorism and promote peace.

In 2022, because of tremendous difficulties on access to finance, Caroline along with 6 other Cameroonian women leaders decided to invest and launch the very first impact funds of the sub region called SAVE (Support to African and Vulnerable Entrepreneurs). Her goals were to finance projects for young girls and displaced women and girls all across Africa. Two major companies decided to partner with her on that initiative: Advans which is the world leader in microfinance and E4IMpact/JFN center which is the leader in incubation for entrepreneurship. Caroline is the one who initiated of all these programs and set them up. Caroline was recognized as a leader and equipped textile entrepreneur by the Former Secretary of State Hillary Clinton during her closing remarks at the Agoa Forum that was held in Zambia in June 2010.