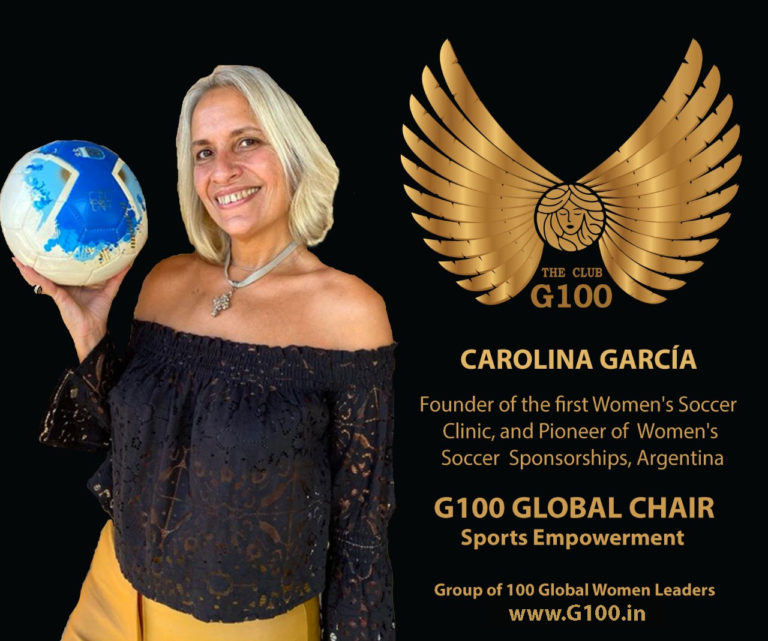 She is a women’s football evangelist and leader in the Soccer industry with more than 20 years of management experience especially with organising funding and sponsorships for women’s soccer, becoming the first woman in Argentina dedicated to a business that was earlier the sole reserve of men. A passionate soccer lover and an active seeker of challenges, she was a senior executive in a mining company and then one day soccer knocked on her door along with the world of sales.

A prestigious newspaper put as the headline in their editorial on her: The Woman who best sells soccer in Argentina. In 2008 she was summoned by the Pachuca Club of Mexico, due to her expertise and way of relating to the main players in the industry, to take charge of the Communication of the Club’s History during the landing in Argentina.

Creator with the Foundation of Social Defense (FUDESO) of the First Forum of Development for Sports Equity (FID) supported by private companies and institutions like Buenos Aires Sports, Sports and Recreation of La Plata, etc, Argentina. Summoned to give form to FAMUD (Women’s Federation on Sports) belonging to the CAD, summoning the first references of Sports to give them knowledge of the project, Argentina.
Born marketer, she sees in advance what is coming or how she likes to say: where the ball is going to pass through. In 2012 she traveled to a World Soccer Fair that time in Brazil and she meet the executive who was managing Women’s Soccer at FIFA at that time.

Tatjana Haenni saw in Carolina the person who was going to become a benchmark, change maker, trailblazing for this sport in Argentina. She trained her, guided her and taught her the phrase that Carolina repeats all the time: To Motivate is To Invest.

From that moment on, that already woman trained in education and expertise saw another path where she should leave her mark, Women’s Soccer, that sport not seen, not considered, not made visible and began to knock on doors on the highest echelons of power and positions. All the No’s she found, she only treated them as the possible Yes’s of tomorrow – all she had to do was persevere and not give up. But life also wanted to play a game with her as she says – so when she got cancer, she had to leave everything in the field. But when her chemotherapy ended she was summoned by FIFA to work in the U-17 World Cup in Costa Rica in 2014. She accepted the Call – and gave herself the gift of courage and strength once again.

She wanted to connect Sports to the cause of Gender Equity and so she created the phrase that accompanies her since 2014 #NivelarLaCancha , which means #LevelTheField, and with which she expresses that she will continue working to narrow the inequality gap between men and women in sport. She created, organized, led in 2016 the 1st Latin American Congress on Women and Sports, which was supported by FIFA, Conmebol among so many associations and professionals in the industry inside and outside of the field of the world.

For three consecutive years she was a Jury for The Guardian newspaper, UK representing Latin America to choose the Best Player of the Year. Convened by She Kicks Magazine to make notes to Players of the Argentine National Women’s National Team prior to the FIFA Women’s World Cup in France 2016.

In 2017 she redoubled the bet, a Congress on Women’s Soccer was never held in Argentina. She formed a team of women in the industry and thus the first event where soccer women had their own voice it took place in Rosario, Argentina. In 2018 she created and performed the first Women’s Soccer Clinic in Argentina, giving prominence to the Players. She argued that people should see that women play soccer.

She looked for references from Boca and River main teams in Argentina and took them to Pinamar, coast of Argentina, and people flocked to see them. The excited players signed balls, t-shirts, they all looked at Carolina and said with their eyes ‘Sister, Thank you.’

In 2018 FIFA again called her to be the Jury of the pre-selection for the Best Female Soccer Player and Best Coach, of the BEST event, in England representing all Latin America. In 2019 and 2020, she became the first Women’s Soccer Sponsorship Consultant in Argentina for Rexona Brand, which was a Sponsor of the Argentine Major Women’s National Team, then AFA Women’s Soccer League and the women’s soccer team apparel of River and Boca.

She was chosen to speak on Personal Branding, Sports Marketing and Sports Sponsorship at the first Argentine Football Women’s Coaches Congress and the 1st Latin American Football Women’s Coaches Congress organized by ATFA. In 2021, she was called by Conmebol, South American Soccer Confederation to a Jury at the first Latin American Congress on Women’s Soccer, Paraguay.

Carolina believes that One Woman arrives, all women arrive. The Player Scores Goals but the Team is the one that wins. Carolina loves to walk the road less travelled in the spirit of a true pioneer because she maintains that she has the capacity to achieve it and the conviction to score the Goal.

Above all, a dear Soul Sister with great reserve of enthusiasm, passion and perseverance to innovate and transform lives through the empowering platform of Sports.