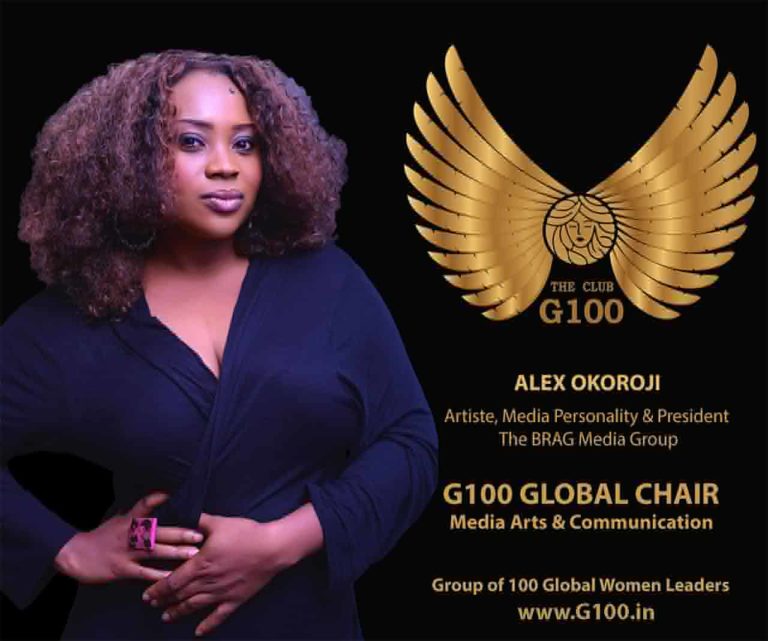 She is a Nigerian Actress and creative powerhouse navigating the world of Art, Media and Entertainment for almost two decades as an Artiste and Creative Businesswoman. She is the Founder & President of The BRAG Media Group, a creative communications company and owns several platforms including – The BRAG Media Company, BRAG! Magazine, The BRAG Club, The BRAG Radio Network, The BRAG Shop and The BRAG Media Foundation.

Listed among the Most Influential Women in the World by Richtopia, in their Top 250 Power list’ as one of only 5 Nigerians on the list (alongside Ngozi Okonjo-Iweala, Oby Ezekwesili, Abike Dabiri, Amina J. Mohammed).

Alex Okoroji has been featured and mentioned in over 250 Media Platforms around the World like Huffington Post, The Guardian, CNN, The Telegraph, Mogul, The Sun, The New York Journal, Fox, ABC, NBC, Market Watch. She was the first African Woman to be featured in the Women Rock Project in 2016.

Alex Okoroji was honored with a Nigerian Goodwill Ambassador Award in 2017, An African Icon Award and a 2017 Peace Achievers Award as ‘Media Personality of the Year’.

She was named, one of “60 Women to Watch Out For in 2021” by PAW Africa. In February 2020 in London, she received the “Shine Legacy Award in Media” and was awarded “Africa Most Influential Creative Consultant of the Year” at the 2020 edition of the Africa Leading Women Awards.

Dubbed the “Oprah of Africa” by many of her guests, Alex Okoroji is a former daytime TV Presenter and host of a LIVE International Talk Radio Show syndicated on 14 Digital Networks around the world with over 4.6 Million Listens collectively and over 150 Hours of Unfiltered and Heart-Centered Conversations with Global icons, business leaders, entertainers and high-profile celebrity guests.

She was the National Coordinator of 4NL/4NN (4 New Lagos and 4 New Nigeria) a social pressure group and think-tank made up of entertainers and media celebrities advocating for a New Nigeria back in 2014. In 2018, Alex Okoroji was invited to join other celebrities and celebrity activists around the world like Serena Williams and Demi Moore who participated in the annual CNN Freedom Project – a global media campaign against modern day slavery.

With acting training at the New York Film Academy and over 25 productions to her credit, Alex Okoroji is a Performing, Visual and Literary Artiste. She is also Director of International Affiliations at the Actors Guild of Nigeria (AGN). She has featured in movies and has played some of the best characters in popular Nigerian Television Soap Operas and Series.

She has written several scripts for TV Commercials, Documentaries, and award-winning Screenplays for Movies. As a top-notch Voice Actor, her voice has graced many international infomercials, radio dramas, animation, podcast intros and commercials for Television and Radio.

Above all, a dear Soul Sister with heart and humility who offers her blessed gifts in the service of humanity and community.